Information about Food Addicts in Recovery Anonymous, for reporters and other members of the media

Click here to see more stories about FA in print, video, and radio

Food Addicts in Recovery Anonymous (FA) is a program of recovery based on the Twelve Steps of Alcoholics Anonymous.

FA members are men and women of all ages. Some have been obese; others have been severely underweight, bulimic, or so obsessed with food or weight that normal life was difficult or impossible. The common denominator uniting members of FA™ is addiction and a relationship with food that parallels an alcoholic’s relationship with alcohol.

To learn more about food addiction and recovery in FA, click here to read the About FA FAQs. 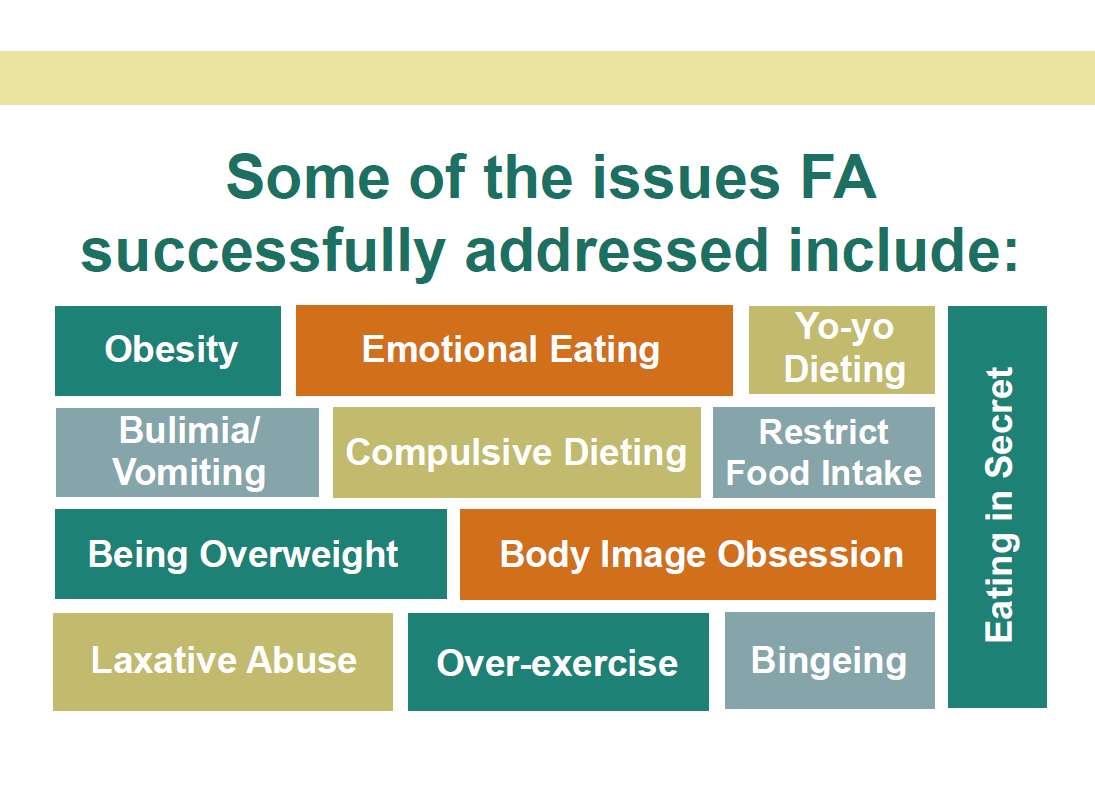 What makes FA Different from other 12-Step Programs?

There are now many programs using a Twelve Step approach for people having problems with weight or food. FA is distinctive because it focuses on addiction, not “compulsion,” “eating disorders,” or any of what it views as symptoms of the core illness (anorexia, obesity, or bulimia, for example).

Further, FA is united by a single definition of abstinence that is clear and unchanging. Most important, in addition to the usual support offered through individual contact and group meetings, the program gives members an effective means for doing each of the Twelve Steps in sequence, leading to a change in personality and a way of life that makes long-term, continuous abstinence possible. The members of FA often refer themselves as a “fellowship” united by warmth, trust, outreach to those who might want the program, and service to those who are new to it.

Food Addicts in Recovery Anonymous, Inc. is the umbrella entity that supports meeting groups and FA individuals around the world. It is internally known as “WSI” (for World Service Incorporated). WSI is led by thirteen, elected trustees (members of FA) and is headquartered in Woburn, Massachusetts. FA meetings are also supported and united by incorporated regional associations (intergroups) and smaller, unincorporated regional affiliations (chapters). 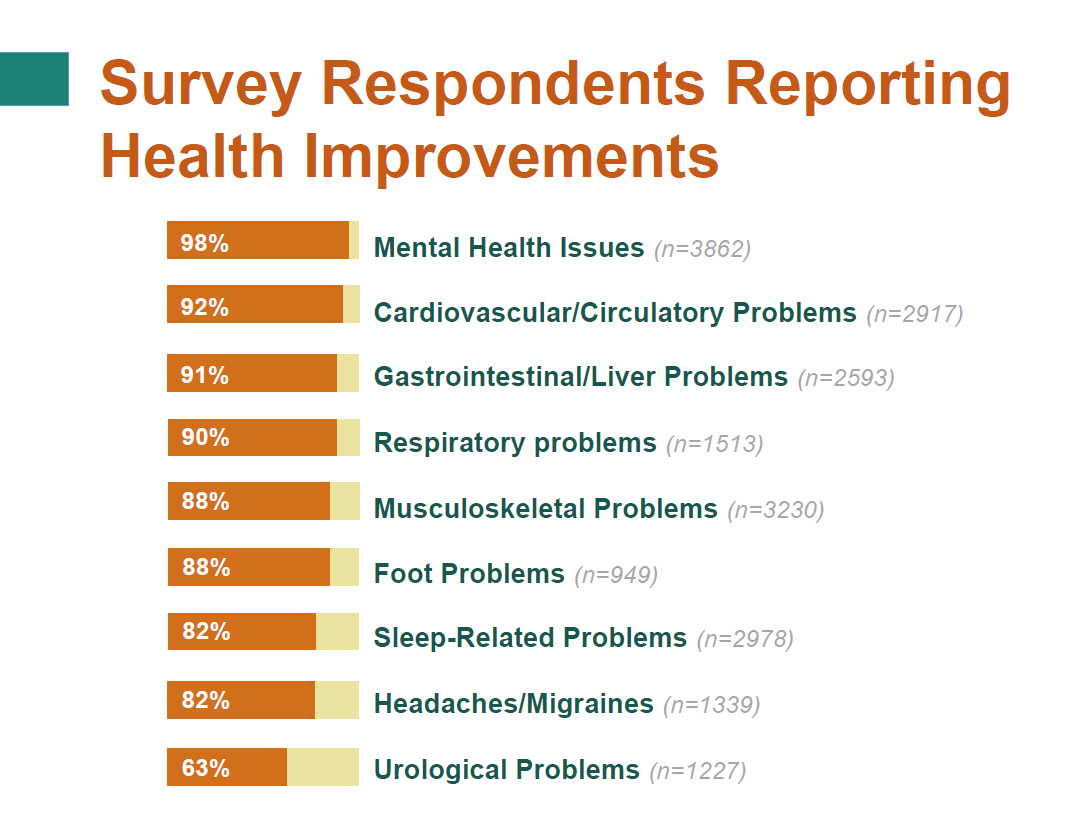 The practice of anonymity is described within FA as the spiritual foundation of the program. Internally, FA seeks to ensure the confidentiality of anyone in the program or anyone exploring it. Each person’s story or FA membership is his or hers to reveal.

On the public level, members of FA™ refrain from using their full names or revealing their faces. This ensures that no individual is perceived as speaking for or representing the program as a whole. Click here to read FA's letter to the media about anonymity.

In keeping with the practice of anonymity, meetings are typically closed to members of the media who are there to report on them. If you are a reporter or a photographer who is interested in FA meetings, please contact the World Service Public Information Committee: pi@foodaddicts.org for assistance. 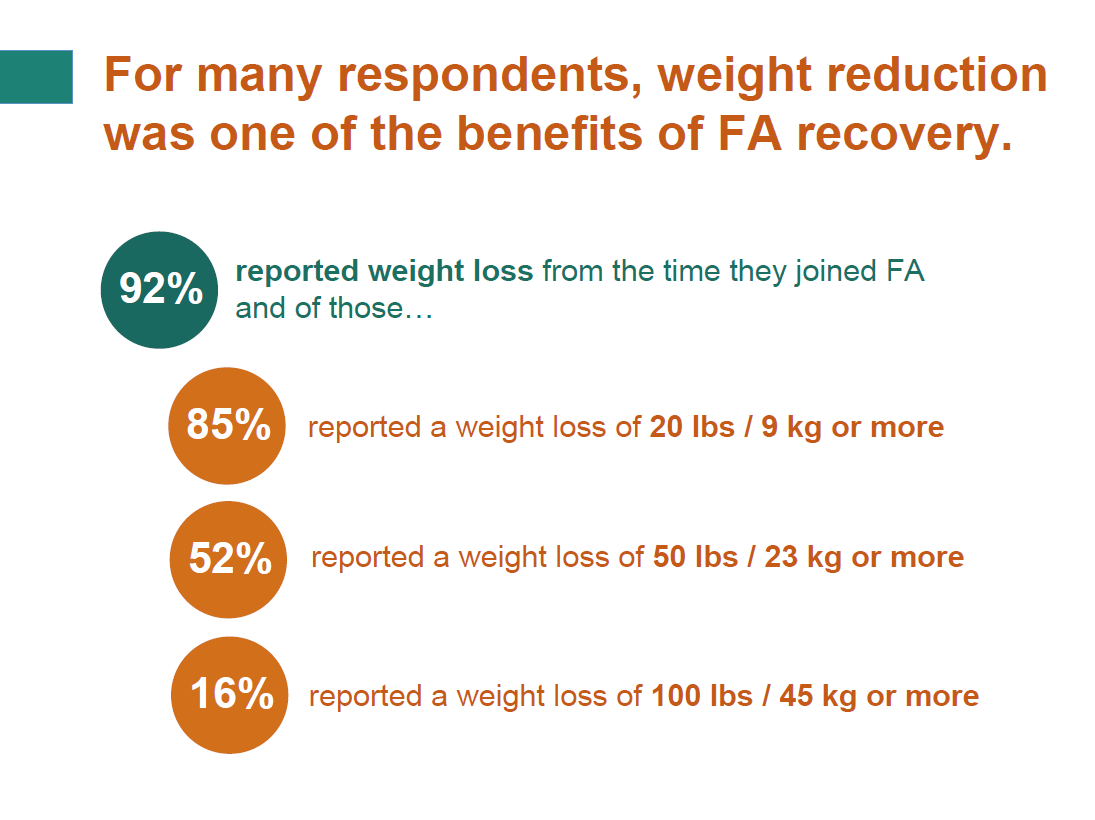 Food Addicts in Recovery Anonymous, Inc. is a 501(c)(3) non-profit charitable organization that is primarily funded through contributions given by members of FA. The acceptance of bequests or donations from non-members, outside organizations, and anonymous donors is prohibited. Individual members are restricted to donations or bequests of no more than $2,000 in a year. 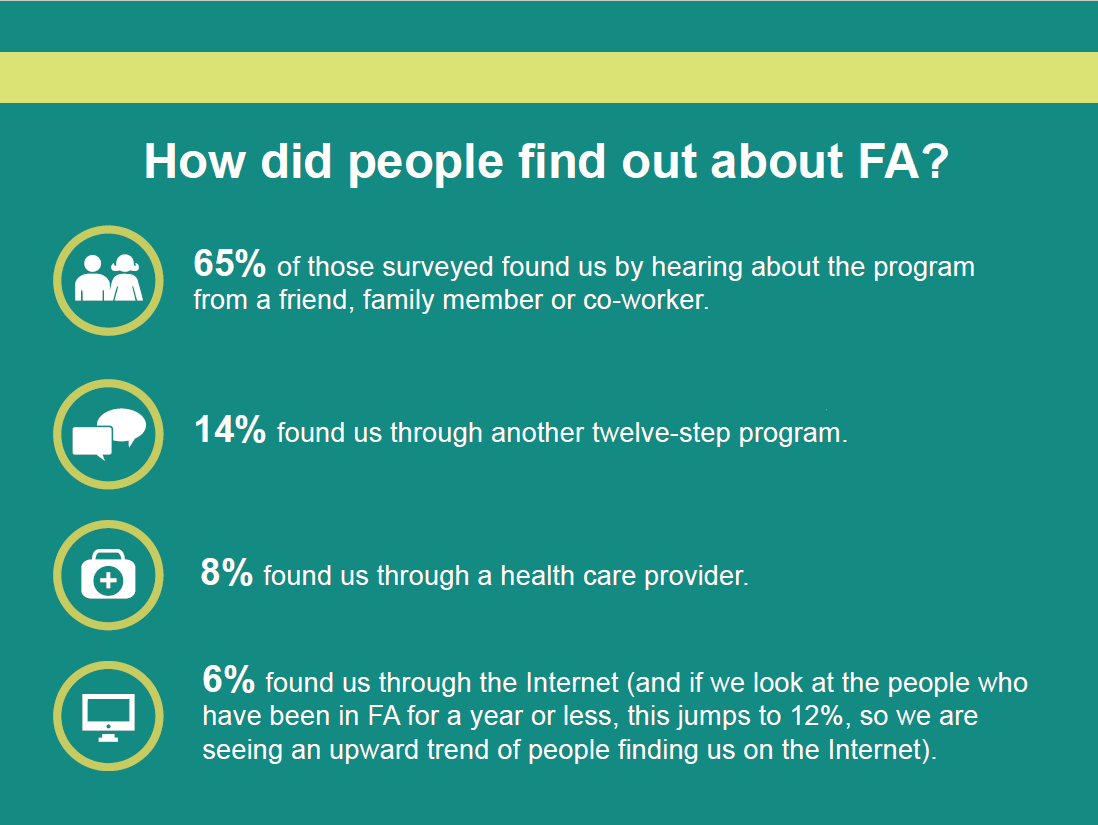 In the early 1980s, the FA program began to take form within the context of Overeaters Anonymous (OA), another Twelve Step program. At that time, in Chelsea, Massachusetts, and nearby, several OA meetings began to embrace a set of distinctive practices. The meetings were united by a shared definition of abstinence; the requirement that speakers at each meeting have a minimum of 90 days of continuous abstinence; the practice of doing the Twelve Steps in AWOL groups; and the belief that overeating, undereating, bulimia, and other food-related, self-destructive behaviors are symptoms of the disease of addiction. These meetings were popularly called or criticized as “90-day meetings.”

Over time, it became clear that the program developed at “90-day meetings” was distinctive from that of OA. Further, this program had grown. Members moved from the Boston area to Michigan, Florida, Texas, New York, California, Australia, and Germany, taking their recovery with them and establishing meetings in communities where they lived. In 1998, a small group gathered to discuss the possibility of establishing a separate program. “Food Addicts in Recovery Anonymous” was launched later that year. The organization was legally incorporated in 1998.

Today FA has over 6000 members across the world.

Click here to listen to or read FA's early history through the eyes of one of FA's earliest members.

Helpful Links for Reporting on FA